Ann H. Howell has had several short stories published. “Just My Eight O’Clock and Me,” http://www.coffeebeanshop.com; “April,” WNC Woman; and in the book Hungry for Home, Stories of Food From Across The Carolinas,” a compilation of stories and recipes featuring many of her favorite authors, including Lee Smith.

Ann lives with her husband, part feral cat, and rescue dog by the Blue Ridge Parkway in Asheville, North Carolina, a place they call Hummingbird Hill, near the rural community where she was born and raised. She graduated from a local high school and received an Associate’s Degree from St. Genevieve-of-the-Pines Secretarial School in Asheville (now closed). Ann has been an Administrative Assistant, taken creative writing classes at the local community college and university, belonged to a writing group for almost twenty years, a home maker, raised two sons, welcomed a daughter-in-law into the family, and two young grandchildren.

Fun fact:  Asheville seems to be on a lot of radars. So, when Ann meets someone new to Asheville, who asks where she is from, she never ceases to be amazed they are shocked to learn her family has been here for several generations.

Silly fact:  Ann played the lead in her eighth grade class production of Cinderella, but soon learned women are so much more than princesses and that there were few job openings for the position. True, though she loves to foster her granddaughter’s imagination, whether she’s pretended to be a princess, a mermaid, or acting the little scholar or just the two of them in dresses and vintage hats taking afternoon tea on the porch. Ann also enjoys her active and inquisitive grandson, who loves any kind of ball, dinosaurs, and needs boundaries to keep him from chasing the occasional deer or black bear wandering through the woods around Hummingbird Hill. 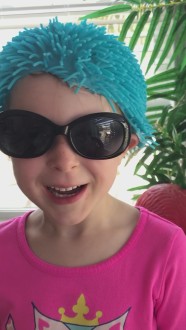 Author’s photo of an incognito princess with mermaid hair?

Author’s photo of a sweet adventurer itching to help St. Francis watch over Mama and one of her three cubs.